To weightlifters it’s “gyno”, to teenage boys it’s “jigglies”, and to adult men it’s “manboob”. It’s all the same, but a number of factors can cause this common endocrine disorder that manifests in abnormally overdeveloped male breast tissue.

Everyone knows that men produce testosterone, but fewer know that this vital male hormone is converted to estrogen in fatty tissue. In adolescent boys, when their hormones turn on at puberty, it is common for hormonal changes to cause tender breast buds. 99% of the time, these problems resolve as boys become less sensitive to their circulating estrogen. But about 1% of the time, the testosterone and estrogen do not rebalance, and boys continue to have swollen breast tissue.

Many sufferers of gynecomastia end up wearing compression tops, frequently followed by a t-shirt or two and then a heavier shirt over this to conceal their appearance. They don’t take their shirt off at the beach, and never want to be skins in basketball. Pediatricians usually try to convince teens with gynecomastia that this will settle in time, but after a couple of years and comprehensive endocrine examinations, they are referred to plastic surgery. 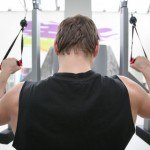 Weightlifters can get breasts if they are taking supplements that lead to higher testosterone levels, since the breakdown results in higher estrogen levels. Older men, including those on antacid medications, can also see breast development as a side effect of those medicines – at least 25% of men ages 50 to 80 are affected by gynecomastia.

In all cases, the initial response to the estrogen is development of a breast bud directly beneath the nipple-areola complex. As in women developing breasts, the breast bud forms first and then the fat is recruited to the area behind the breast bud. In spite of weight loss, negative hormonal workups done by doctors, and mostly ineffective over-the-counter medications, patients frequently turn to plastic surgery after years of feeling negative about how they look. They have a desire to go to the beach and take their shirt off in public, as well as to not bounce or be teased.

Plastic surgery for gynecomastia is done for men who have stable breast size. The surgery can involve either office-based procedures or surgery done in an operating room, and is usually done through the lower areola-true skin border. We begin by anesthetizing the chest with local anesthetic. For men who require liposuction of the whole breast area, we use a large amount of dilute local anesthetic called tumescent solution. After the local anesthesia has taken effect, we make an incision in the lower border of the areola. We will remove the breast bud, but try to leave an adequate amount of skin and fat underneath the areola so that it does not look depressed or sunken in when we are done. For young and particularly thin men and weightlifters, liposuction is usually not necessary because their situation is usually just breast bud itself. After completion of the breast bud excision, we do liposuction if that is necessary.

Postoperatively, patients are sewn back together with buried stitches and placed in postoperative compression vests. The most common complication after this operation is postoperative bleeding where the breast bud had been excised. Patients may begin working out and weight lifting at 10 days postoperatively, given that they have not had any problems related to the operation. Male breast reduction is covered by insurance in only extremely severe cases and by only a few insurance companies.

While an estimated 1 in 3 men are affected by breast and nipple enlargement, fewer decide to reclaim their confidence with a male breast reduction. If you are ready to live without “gyno”, “jigglies”, or “manboob”, contact Fox Valley Plastic Surgery today.