All About Tummy Tucks

Many women come to our practice dissatisfied with how their lower stomach looks. They either have an excess of fat or of skin (or both) and in many cases, previous scars from cesarean sections or surgery, have left them with a shelf of tissue that hangs over the scar. Patients are convinced by infomercials that localized exercise programs get rid of abdominal fat, but this is not true. Fat goes to where the patient’s genetics and hormones determine the fat will go – so those thousands of crunches may be in vain. We call the belief that localized exercise gets rid of localized fat the trillion-dollar myth.

In the plastic surgery world, there are essentially two types of tummy tuck: full, which tightens the entire abdominal region, and mini, which is confined to beneath the navel. This is not true in our practice, however, as we have coined the term moderate abdominoplasty. 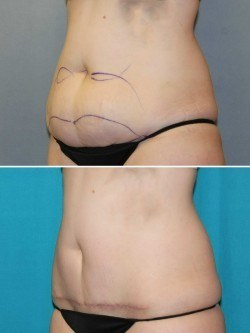 is a way to get rid of a previous cesarean section scar. The excision is similar to tracing the banana across the lower stomach and removing the skin to tighten an area of laxity. If too much skin is pulled, the skin around the belly button hoods over itself. This operation is frequently paired with liposuction of the lower abdominal area or hips.

During pregnancy, the placenta produces relaxin, which is a hormone that relaxes the muscular walls and ligaments to help the baby’s head come out of the pelvis. For many women, this muscle laxity persists after the children have been born, and no amount of exercise will adequately tighten the muscles again. These are the women who are excellent candidates for formal abdominoplasty. 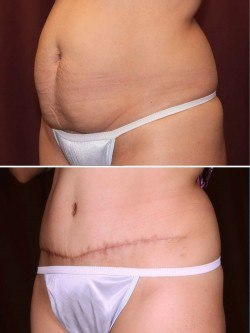 removes all the skin from the pubic area all the way up to the umbilicus. Then by raising the skin above the bellybutton all the way up to the rib margin, the upper skin is pulled down and sewn to a low transverse incision. Different women have different body types, and where these final scars are placed can be different, depending on the length of your torso and the tightness of your upper abdominal skin. The umbilicus is brought through the skin after re-draping and a new hole is cut for it. We tighten the muscles then by sewing the 2 sides together which helps women who have lacks muscles especially after the stretching of children and pregnancy.

When the muscle is sewn, it is uncomfortable for weeks to months. We do not allow patients to lift more than about 10 pounds after this procedure for 6 weeks. The muscle tightening aspect is the painful portion of this surgery, and limits return to work for many of our patients. Because no two people are the same, neither are any two abdominoplasties. We will work with you to choose an operation that perfectly fits your body, aesthetic goals, and medical history. If you have a stubborn layer of fat or skin sticking around due to childbirth, weight loss, or simply genetics, a tummy tuck may be the way to get the flat abdomen you want.